In recent years polymerase chain reaction (PCR) has been widely used to identify genomic sequences of pathogens in the medical research and diagnostic industry.  This includes body fluids, tissue  sections from patients, cells grown in the research lab or isolated from the patients. Some times samples include formalin fixed paraffin embedded tissue sections or frozen tissues. The most widely used protocol for DNA extraction from these samples include proteinase K digestion, followed by phenol chloroform extraction, and ethanol precipitation. This procedure is very long, laborious and is not very efficient. Besides the they type of extraction exposes the operator to very harmful chemicals and vapors. An alternate efficient, and fast method is described here which is relatively safe from dangerous chemicals, or vapors. 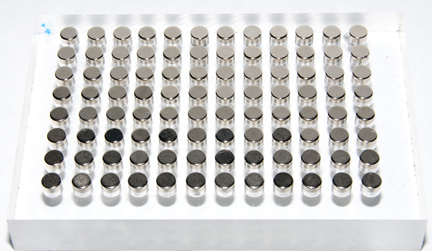 The process involves cell lysis to release DNA from the samples and subsequent adsorption to the labelled magnetic beads. This can be done with any of the samples mentioned above. One example of extracting DNA from formalin fixed paraffin embedded ( FFPE)  sample will be described here.  The DNA was extracted from 5 micro meter tissue. The paraffin was removed by incubation the sections at 60 degree xylene at room temperature for 15 mins. Then the sample was washed with 100% and 70%  ethanol.  After air drying the pellet was dissolved in dispelled water and labelled magnetic beads were added in a small Eppendorf tube. The sample with magnetic beads were gently suspended and left at room temperature for 5 mins, for beads to adhere to DNA.  After the sample tubes were placed on Magnetic Stand (MAG 24) for 2 mins, the supernatant was carefully removed as not to disturb the DNA pellet.  If 96 well plates are used for this procedure for small samples, one can use the MAG 96, for easy and efficient DNA extraction.

After removing the supernatant, washing buffer was added, gently suspended and returned to the magnetic separator. Supernatant was removed and the wash step was repeated two more times, and remove the resedual contaminants by careful pipetting without disturbing the DNA pellet.  DNA was eluted by adding TE buffer ( Tris/HCL, pH 7.6, 50 mM EDTA). After adding a small volume of TE buffer, mix the magnetic beads adhering to DNA by gentle mixing with a vortex. . Sample was placed on a heat block for 65 degrees C  for ten mins for elution process to complete. The tubes are placed once more on the appropriate magnetic stands, and the suspended DNA is removed, and a small aliquot is used for PCR reaction. If the magnetic bead based separation is used for larger 15ml, or 50 ml tubes one can use MAG 15/50 magnetic stands very efficiently. 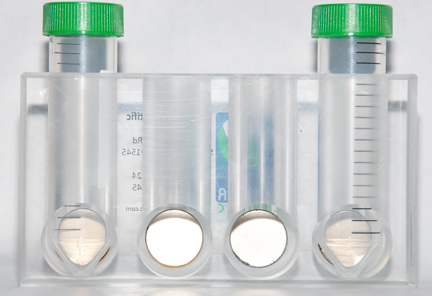